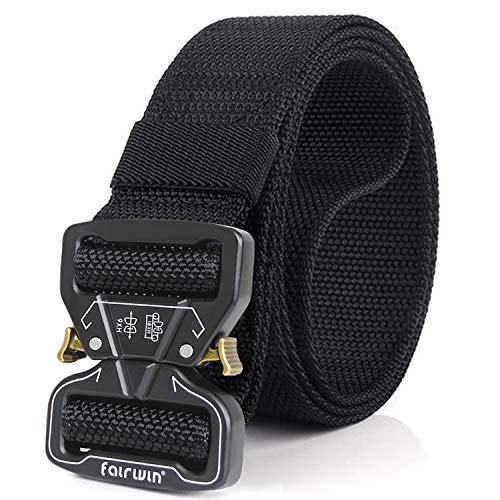 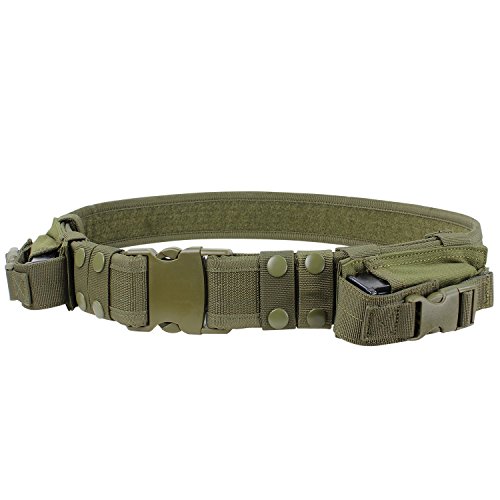 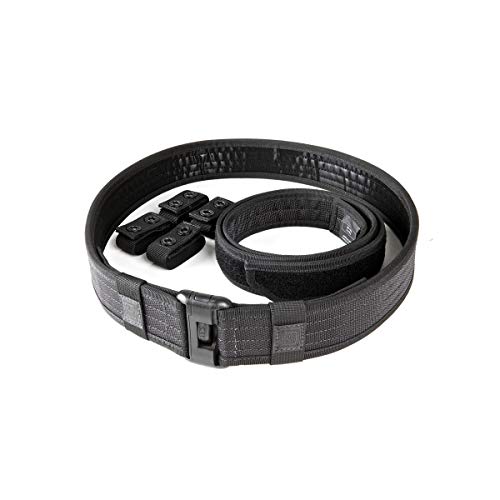 When going outdoor on an expedition, every item is important. No item is to be underestimated because they all have their distinct functions. Imagine going for a job interview in an Italian suit with nice polished shoes to match but unfortunately, your pants start to fall from your waist. How would you feel, wonderful or embarrassed? Your confidence and performance get affected because you won’t be looking smart even to yourself. In a nutshell, belts make you look smarter. Alright, let’s look at the best survival belt.

You might be asking what a survival belt does, let me explain. A survival belt is a piece of outdoor gear that lets you secure items in place. It can even be used as a weapon for self-defence when the need arises.

At a glance, some survival belts might look completely insignificant and useless but don’t be deceived, they are as important as important can be. That is why we have done a review of the top five products that will suit your choice of survival belt.

This Fairwin Tactical Belt is made from nylon webbing material. It is lightweight and very breathable, especially if you have to walk for long.

It is a heavy-duty belt with a quick-release metal buckle. This is to enable you to remove the belt easily when you need to quickly use it as a weapon.’

The belt comes in three different sizes; small, medium, and large, so there is no need for holes. It is very adjustable in case you need to tighten or loosen the belt.

It has a unique and fashionable buckle design. It comes with webbing that allows you to attach additional survival gears to it. That is to say that your convenience is covered.

This is a heavy-duty belt with durability. It allows you to attach plenty of gears to it. There are two removable pistol magazine pouches attached to it to accommodate a few more survival gears.

The durability of the belt is guaranteed because it is constructed from nylon and has 2’’ thickness. The belt is adjustable to fit any waist, especially those less than 44’’. There are four adjustable loops attached to it in case you want to modify it to your taste.

The quick-release buckle is made of plastic and a little sturdy in the way it is built. Although it might get damaged if faced with difficult elements, it is your best bet when it comes to passage through airports. Now you have an advantage in every disadvantage right.

The belt is a heavy-duty belt built from 1680 denier nylon. Its durability is therefore guaranteed. It has a dual-belt configuration. That is the main belt and an inner belt. This is made possible by the Duraflex hardware.

The Sierra Bravo Duty Tactical Belt has the capacity to withstand the elements. With its water-resistance and abrasion-resistance, you can be sure that it will last long.

The belt is MOLLE and SlickStick compatible to hold fast important tools like a flashlight. It is available in seven different sizes which means that no matter the size of your waist, you can be sure to find a perfect fit. 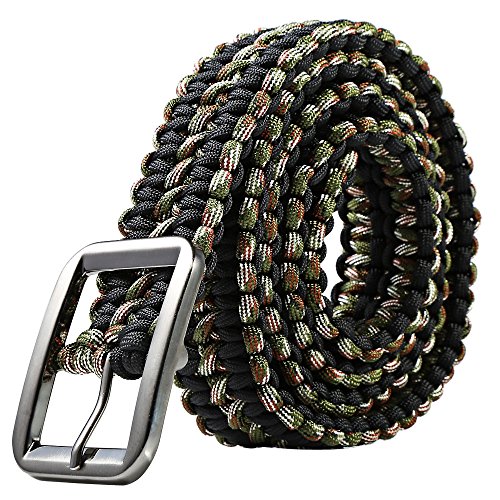 This belt is made up of strong paracord which offers up 28 meters of rope. In case you need to tie things or transport large items, the belt, having 500lbs, can be of use.

The fact that Stylrtop Tactical Waist Survival Belt comes with paracord as an added advantage. You don’t have to take a paracord separately on that adventure anymore. It makes it durable and gives it the multipurpose factor.

For wilderness survival, the best have a variety of black and green camouflage styles. 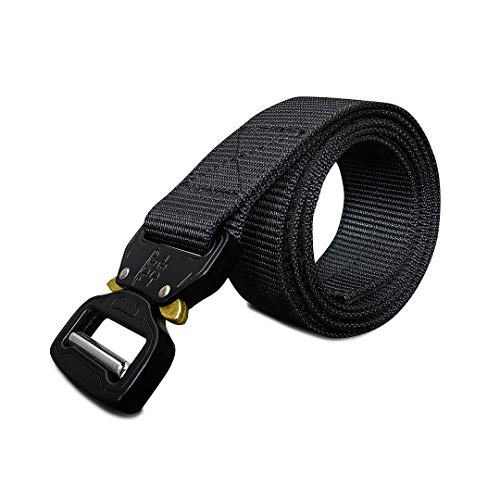 The Wolf Tactical EDC Belt is a simple fashionable best that is both lightweight and comfortable in survival situations. It is made of premium nylon webbing that is rip-resistant and very strong.

It is strong enough to carry tools that will be useful on your expedition. That is, holsters can be attached to the belt to help carry things and free your backpack. This will save you the stress of searching for things in your backpack in times of emergency.

The quick-release metal buckle gives it the military look. The buckle makes it easy to fasten and release the belt. You don’t want to be stuck trying to lose your belt during an emergency.

When Sorting for Survival Belts

It is very important to state here that you have to be careful of a belt that claims to have a variety of features. They come with lots of gadgets but during survival situations, these gadgets have no real importance. Choose a belt that is high-quality and can serve you better than the belts that allow for carrying things only.

Most times, survival belts are either made from paracord, webbing material, or leather. So it is good to put these into consideration when making your choice of survival belt.

Because of its strength, webbing materials are normally used for survival belts. It is durable, strong, and also lightweight. It is very comfortable to wear and won’t give you any form of inconvenience. Be conscious of the tensile strength and resistance of the belt. That is, how many pounds it has and how much it can withstand before breaking.

A very important survival gear that should not be forgotten is the paracord and a paracord belt is your sure way to have one. Its usefulness is beyond measures. It is made up of threads that can be untied and used as a fishing line.

The thickness of the paracord belt makes it uncomfortable to wear for a long time. Also, the general usefulness of the belt as a whole is defeated as, though strong and durable, cannot hold your pants up. Another quick advice, make sure you try a belt on and be sure you are satisfied with it before heading out on that adventure to avoid frustration.

Never look down on a survival belt as it can be used for so many things, even as a first-aid tool. When injured and you need to stop the bleeding, your belt can come in handy and be used as a tourniquet to stop the bleeding. Just take it off your waist and tighten it around the injured area and the flow of blood will be limited.

It can also be used as a sling when you sustain an injury. In the case of a broken bone, you can attach a splint and fasten your survival belt to keep it in place.

You don’t need to be told that weapons are very important in survival situations and the more you carry, the safer you feel. It is more discreet when it is a belt because your target won’t expect it and therefore not see it coming.

A survival belt can be used as a whip. With a strong swing, you are sure to cause enough damage. It can also be used to choke an enemy and the desired injury depends on the amount of force applied.

In times of emergency, the survival belt can also be used. When you need to rescue people, a strong belt can be used as a rope to help pull people up out of holes.

The Condor Tactical Belt is a heavy-duty belt with durability. It allows you to attach plenty of gears to it. The two removable pistol magazine pouches attached to it are so you can attach a few more survival gears.

The durability of the belt is guaranteed because it is constructed from nylon and has 2’’ thickness. The belt is adjustable to fit any waist, especially those less than 44’’. There are four adjustable loops attached to it in case you want to modify it to your taste.

The quick-release buckle is made of plastic and a little sturdy in the way it is built. Although it might get damaged if faced with difficult elements, it is your best bet when it comes to passage through airports.

Our choice of the belt for you doesn’t stop you from buying others. As a matter of fact, you can buy all as you never can tell when any of them will come in handy.

Do you like our review? Please let us know by dropping feedback for us in the comment section below. You can also reach us through any of our social media pages and we’d be grateful. We hope to hear from you soon.